The hate crime was caught on video surveillance and it appears to be a bald white man with a Nirvana t-shirt.

Protestors from around the world have painted beautiful murals in honor of George Floyd. Many seek justice for this hate crime.

The hair salon was boarded up during the riots to prevent people from looting. Verde Salon owner Tiffany Sidwell had the George Floyd mural painted in front of her salon to show her support. Sidwell plans on getting it re-painted.

Protestors in Philadelphia are painting “End Racism Now” on the street. #Philly pic.twitter.com/fGKggV3ZTV

Hundreds of people painted the words “End Racism Now” on a street in Philadelphia, along with a list of names of those killed in incidents of police violence. #NoJusticeNoPeace#Icantbreathe #WeWanttoLive #GeorgeFloyd #PhillyProtest #Philly ✊🏿✊🏿 pic.twitter.com/824UsFshhF

"End Racism Now" being painted on the street outside of the South Philly station. #GeorgeFloyd #PhillyProtest #BLMprotest #Philadelphia pic.twitter.com/qf0mTwQyXM

Big thanks to @SocialSola for sharing this. #Philly #BlackLivesMatter #Philadelphia #BLM pic.twitter.com/Q67y36vADX

Only in Philly would police pull a PR stunt and approve “End Racism Now” to be painted all for it to be removed late at night.#BlackLivesMatter #phillypolice #phillyprotest#EndRacismNow pic.twitter.com/WwTm24Zf4w

[caption id="attachment_3144693" align="alignnone" width="828"] Source: IG / IG[/caption] The City Of Brotherly Love came together in Fishtown to create something beautiful that it would be recognized around the world. Local residents, police officers, even the national guard helped paint an 'End Racism Now' mural in the heart of Fishtown. Now, less than 24 hours later the mural was removed and people are labeling it a PR stunt to get people to stop rioting. Sources say that the mural was temporarily removed and will be relocated somewhere permanently. We hope that is the case but in the meantime check out some of the photos of the short-lived mural. RELATED: Police Retrieve Stolen ATM Machines From Looters House In West Philly RELATED: Philly Sanitation Employee’s Rally After Unsafe Working Conditions During COVID-19 [Photos] 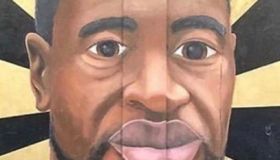