How Dick Gregory Used Comedy To Change The World

Dick Gregory might have been one of the smartest men in the world. The civil rights activist, author, and comedian was not only a skilled leader in the world of social change, he could also make you laugh and think at the same time, whenever he told a joke.

Gregory began performing and telling jokes while he was in the military in the 1950s.  There he crafted his comedic timing and honed his skills a fairly good comic, winning many military talent shows. It wasn’t until he began working  for Hugh Hefner at Playboy Club in Chicago when word started to spread about the young talented comedian’s talents.

“It was the first time they had seen a black comic who was not bucking his eyes, wasn’t dancing and singing and telling mother-in-law jokes,”  Dick Gregory  – the Boston Globe in 2000,

Gregory didn’t let us comedic fame stop there. He started performing on “Tonight Starring Jack Paar” where he would do his routine and then sit at chat about it with Paar. This was the first time in the show’s history than  an African American comedian sat with the host. Gregory started to open the eyes of many Americans with his jokes and groundbreaking actions.

Dick Gregory’s face was printed on US currency as a publicity stunt, but made it into circulation, causing considerable problems

Dick Gregory is the father of 11 children.

How Dick Gregory Used Comedy To Change The World  was originally published on hotspotatl.com 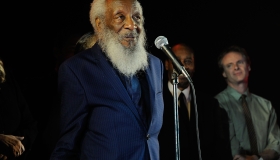 How Dick Gregory Used Comedy To Change The…

Dick Gregory might have been one of the smartest men in the world. The civil rights activist, author, and comedian…