A new development in the violent arrest of Fort Worth woman, Jacqueline Craig surfaced this morning. Fort Worth Police Department body cam footage has leaked, revealing a clearer perspective of the events that took place on Dec. 21, 2016. FWPD Officer William Martin, a 36-year-old white man, was recorded on Facebook Live “antagonizing, assaulting and, ultimately, arresting Craig, a 46-year-old black woman, and later her two daughters—Brea Hymond, 19 and an unidentified 15-year-old.

Get The Latest Music and Entertainment News On Your Phone

On this day, like any concerned mother, Craig reportedly called for police assistance after a white, male neighbor choked her 7-year-old son in retaliation for allegedly “littering” in his yard. The neighbor did admit to “grabbing” the child by the neck, when officers arrived to the scene, however, Officer William Martin found the neighbors account more plausible than Craig’s according his statement to Fort Worth Police Internal Affairs.

Attorney Lee Merritt, Esq., legal counsel for the Craig family, received the below video recording and police department documents from a trusted anonymous source. Texas state laws legally entitle the Craig family to complete investigative files, records and recordings of this incident and any involved officers. Merritt reports, FWPD has denied and/or delayed several requests to provide this information.

Furthermore, the neighbor’s admission to the officer has been “repeatedly” denied by FWPD. The Department has also declined to press charges against the neighbor to the Tarrant County Criminal District Attorney’s Office.

Though the initial Facebook Live video from nearby witnesses showed a great deal of the incident, the newly released body cam footage paints a clearer picture. The footage shows Martin using excessive force to get Hymond, 19, to answer his questions by twisting the teen’s handcuffed arms above her head.

WARNING: This content is graphic and violent. Viewer discretion advised.

Political activist Shaun King, took to his popular Facebook page to summarize what this video represents to the case and the greater discussion of police-community relations. His thoughts:

Now, with this video, we learn: 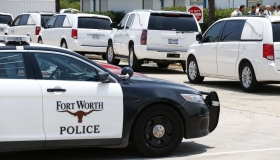 A new development in the violent arrest of Fort Worth woman, Jacqueline Craig surfaced this morning. Fort Worth Police Department…