Nicki Minaj has finally reached the level of fame where she gets a spot at Los Angeles’s Madame Tussauds museum. Of course, her wax doppelganger is based off the iconic “Anaconda” video.

The new addition further supports the point Minaj was making earlier this month about “Anaconda” being shafted for Video of the Year. This doesn’t speak to her argument about the historical shafting of thick black woman, but it does prove that “Anaconda” was ubiquitous enough to earn a nomination. Five hundred million YouTube views is no fluke.

But the wax addition has been in the making since February, according to the Los Angeles Times. A team of 20 sculptors used 300 body measurements to sculpt the “Anaconda”-inspired figurine. The face looks a bit gaunt, but everything else seems to be spot on.

Minaj’s figure will join Lady Gaga, Stevie Wonder and others at the museum’s music room, where it will be a permanent display. The work of art officially went on display today (Tuesday).

Minaj seemed satisfied with it. She spent a bit of her day talking about her likeness and retweeting fan response.

Why must yall b this way😔👀 https://t.co/4MyacuPryh

…@NICKIMINAJ is the 1st female rapper to have a wax figure 🙌🏽🙌🏽🙌🏽😍 FUCKING MOTHER 😂💜 pic.twitter.com/Os1VPNy82j

READ MORE ON THE URBAN DAILY

‘Is That A World Tour Or Your Girl’s Tour?’ Drake Dropped A New Meek Mill Diss Track While You Were Sleeping

Nicki Minaj’s “Anaconda” Video Gets A Wax Spot At Madame Tussauds  was originally published on theurbandaily.com 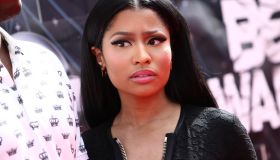 Nicki Minaj has finally reached the level of fame where she gets a spot at Los Angeles’s Madame Tussauds museum. Of course,…